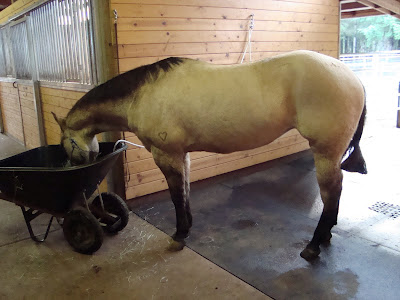 I have been in a "horse funk" the last two months. I returned from vacation the beginning of December to find Maddy with a lifted shoe and a big bite on her butt. The farrier came out, put her shoe back on and the next day went for a little ride and came back with a lame horse. My first thought was abscess, so I soaked for a couple days, then seconded guessed myself and called the vet. After flex tests and thermography, narrowed it to sore inner legs. I thought maybe the lifted the shoe was a product of slipping and splaying. Micro-current, ice, and anti-inflammatories later, she seemed on the mend. After a few rides in the arena, we did a short ride a week ago. The next day, dead lame. This time the other back leg. I am stumped. I start to think the lameness is a symptom of sore back or hip. So have bodyworker scheduled to come out this morning. Planning for the worst, imagining x-rays and months off, and my whole tax refund up in smoke.

Well, I get to the barn this morning....a huge blowout. It was a hoof abscess! I am relieved. The bodyworker saw and felt nothing wrong with back or hips, no heat in the legs. What a stressful two months. I just want to relay my experience so others don't over think it, sometimes it is the easy answer. Posted below is the gross looking abscess. It is large, over two inches, smells terrible. Has anyone had abscess issues where the lameness goes from one leg to the other? Maybe one will blow out the other side? Any thoughts or suggestions from fellow horse friends would be helpful. 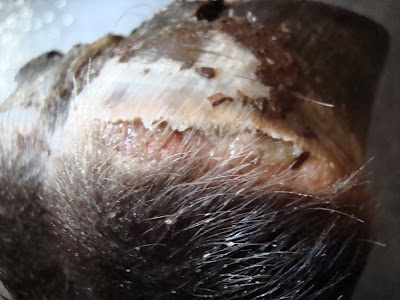 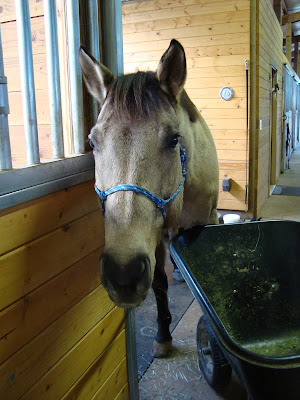 Freebie was an old Appaloosa mare you could put anyone on. She was one of the sweetest horses I've ever come to know. I could trust her to take care of her rider, so when people came to visit, I took them to meet Freebie. She showed my mom, my step dad, my boyfriend, and a few friends the beautiful trails in Oregon. Her owner used her to pack into the mountains for hunting. She was the "old reliable" but she was also a good pal. She would often spend summers out at our barn and in the Fall, she would go back home and do her packing duty. Her owner went out to the pasture and found her dead the other morning. We are all sad. She was such a kind mare and will be missed. Freebie is pictured with Maddy this Fall out by the ponds getting a little snack and below, pictured with my stepdad Cliff. The picture says it all, Freebie brought smiles to everyone. 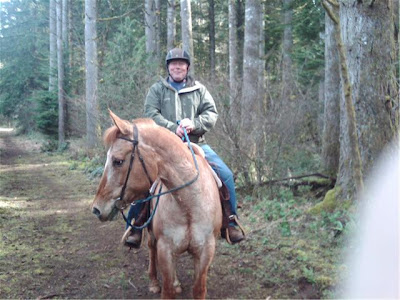 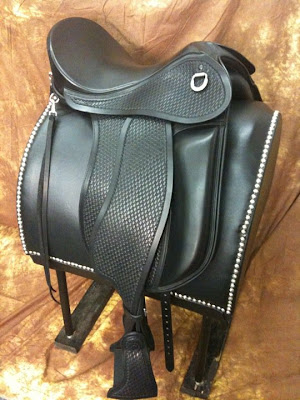 I first saw this saddle a week ago. I went to pick up my new Ansur saddle and Carole Weidner pulled me aside and said "You gotta see this one before you leave." I walked over and my jaw dropped.....I think I heard "Dreamweaver".....and I stuttered "I love it." I think it is the coolest saddle I have ever seen. Basically it is an English/Endurance hybrid called the Endeavor, that you can change fenders and change stirrups to fit your disapline. Well, Ansur Saddlery had a little bit of fun with this one and took it a bit further and tooled it. It is glorious. Today I went and shot some video of it before it heads out the door to its new owner. What a brilliant idea.
Posted by photogchic at 10:51 PM 10 comments: 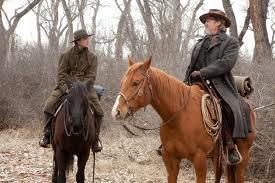 I finally got a chance to see the remake of "True Grit" starring Jeff Bridges and Matt Damon (and various equine stars). I loved it. I think the script was brilliant and all the actors shined. It was fantastic....except

"Why did "Blackie" have to die?"
Blackie is Mattie's ten dollar trusty black pony. Blackie's first time under saddle, he happy canters around in a circle a few times and then they canter off in the pursuit of justice and "Rooster Cogburn" played by Jeff Bridges. Blackie fearlessly jumps into the river to get Mattie across. The river rages, the girl hangs onto the bridle, yet Blackie prevails. The little pony glimmers as he comes out of the water, gives a tired exhale and basks in his achievement.

Blackie is the perfect partner; willing and noble. Then Mattie has to go get bit by a rattlesnake. The little horse carries Rooster and Mattie at break neck speed across the frozen landscape in search of a doctor. A flurry of hooves and passing miles, as Blackie becomes glossy with sweat. Then we see Blackie stumble, he goes down exhausted. Rooster draws his gun....Blackie is put out of his misery. Blackie dies so that Mattie may live. The last selfless act of this heroic mustang pony was to save his partner. For me, the title of this movie is aptly named for "Blackie," an equine with true grit.