The Horses of Abaco

I journeyed to Abaco Island a few years back and spent a day filming the remaining Abaco Horses. At the time, I had big dreams to do a short documentary about the horses. It seemed a fascinating subject; horses descended from those that came with Columbus, a preserved blood line, a mass slaughter, and now the most endangered breed on the planet. At the time there were 8, they are now down to five. My favorite, Bellatrix, the lovely paint mare has since passed on. I remember reaching out and scratching her sunburned face as she munched away on leaves. I was hoping my film would help her, but I failed her. The footage lies dormant in my computer. I almost forgot it was there. I watch the trailer I did years ago and feel hopeless for their situation. I didn't feel that way when I was there walking among them. I was full of hope, but that slipped away and was replaced with frustration after a disagreement with their caretaker.

We had two lines of thinking that varied enough to cause a riff between Mimi and I. I believed they needed outside help; a program to explore diet, health, genetics to find out why they were dying and not reproducing. I wanted to incorporate the opinions of horse people into the film. Mimi wanted to keep things natural...just clinging to hope that one of the mares would have a foal. She is an amazing woman, so dedicated and passionate about her horses, but she is stubborn and set on what she believes is right. She wants no intervention or help. She is a soldier for those horses, works hard and loves them as family. But her years of working alone, has created one line of thought, with little interest in outside opinions.

The horses have an odd diet, surrounded by poisonous plants. I am not sure what can be done about that. I fear they are eating things that are making them sterile. For me, there is no right or wrong...there are just horses on the brink of extinction. In a blink, I fear they will be gone and we will be left to wonder if there was anything we could have done to stop it.

After our disagreement, the project was shelved. I haven't thought about the Abaco horses in awhile. I am cleaning out my computer and stumbled across the trailer. I get teary when I see Bellatrix look into my camera. She is gone, but I think I owe it to her to finish her film.
Posted by photogchic at 2:55 PM 7 comments: 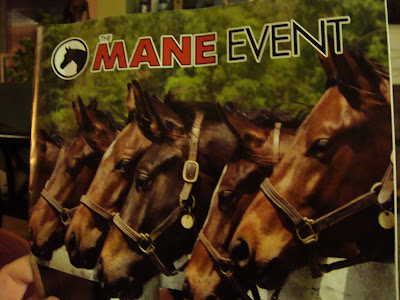 Just got back from my annual trip to Chilliwack, BC after attending "The Mane Event." It is a three day horse expo featuring Canada's top trainers and vendors. I always enjoy going because you see a lot of European products that aren't easily available in the US. Last year my favorite find was Tuffa Boots...this year I loved the HAF pads from Italy and the Sensation line of endurance products from Nickers Saddlery. Also, the distributor for Bucas blankets was there doing water demos with the fabric...can you say "amazing." The wicking fabric on the underside was like the Sham-Wow! The temperature range on the Power Turnout is perfect for Oregon. I will get one at some point...$300 is a little steep right now.

Some great clinicians are always there. One of my favorites is Jonathan Field. He does natural horsemanship, pulling most of his technique and horse philosophy from Parelli. He is really maturing as a teacher and student of the horse and he is a fan favorite up there. I have a clip of him performing the night of the Equine Extravaganza, it is similar to the performance Steve Rother does using a long pole. 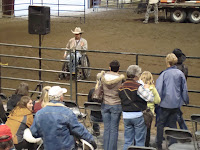 Some of the clinicians that I enjoyed that were new this year...Michael Richardson, the man pictured in a wheelchair, had many strategies for acquiring an independent seat. I really enjoyed his perspective. He was always a horse person, but became a paraplegic after a jeep accident. Michael is involved with NARHA and makes prototype saddles for the handicapped. Aaron Ralston of reining fame was also there. He had a great demo on lead changes. Aaron is excellent at conveying information, I found myself taking many notes. He came out bareback and was an impressive rider. I missed the Trainers Challenge....I was disappointed last year in the judges choice, so I decided to skip it this year. The last photo is a group of ladies who ride side saddle called the "Nags." Can you believe ladies are still wanting to do that?? 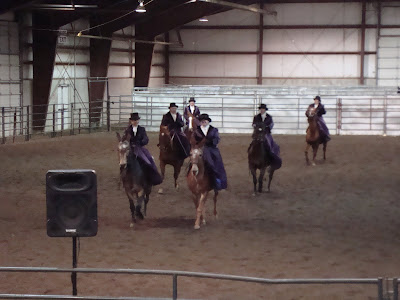 Stay out of the tack store!!!! Damn...now I found more things I just gotta have. The first thing I spot as I walk in...these awesome riding boots by Mountain Horse, called "Wicked Riding Boots." I have quite a few Converse All Stars in my shoe collection, so for me, these are perfect. Black, size 9 please.

I stroll pass the Kerrits, the FITS, the Equine Couture only to spot these awesome denim breeches made by Romfh. I want these. Not too bad at $118.95, considering the Goode Rider Ladies Couture denim is going for $160 and up. Linda over at Glisan Street Saddlery in Portland, really has a good eye for edgy stuff. She gets some of the most amazing bridles from Germany and fleece pads in wonderful colors like caramel. I love her store.

I am soooo looking forward to this movie this weekend. Desert Horses actually got to see him race. Wow. What a horse....we were lucky to have him for 19 years. Amazing spirit, the heart of a champion. This video clip of Secretariat is exhilarating to watch. Enjoy everyone.

I guess the embedded code was disabled by request...go to YouTube and watch it. It is worth it.
Posted by photogchic at 6:19 PM 4 comments: