Have you ever "googled" your horse? I did and I was surprised to see Maddy, aka "Harts Bonnie Dee" is still for sale down in southern California. I was taken to the Hart Quarter Horse Ranch site and there she was in the header picture on the website.

She is the dun standing back on the sandy ridge looking at the camera. I would recognize that mug anywhere. This second photo is her "for sale" picture. She looks kind of out of shape and depressed. It is not a very flattering photo. After spending her formative years roaming the Hart Ranch, she was brought up to Yreka, California for training and posted on Dreamhorse where I came across her and brought her to Oregon.
Posted by photogchic at 8:25 PM 10 comments: 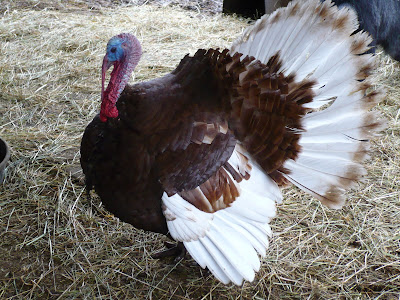 I hope everyone has a wonderful holiday. This is a turkey from down the road. I wonder if he will be around next week:-) Hope so.
Posted by photogchic at 12:25 AM 6 comments:

Today Queenie had a visit from an Equine Chiropractor. She wasn't quite sure what to think of the ordeal. She had a funny look on her face the whole time. I guess she had a rib out and some issues with her back and front left shoulder. I am supposed to ride her on Wednesday and see if I notice a difference in her movement. 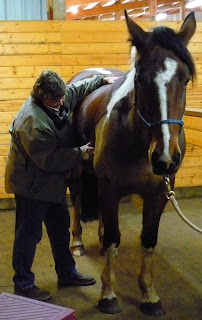 She is coming along so nicely. I have her doing some liberty work on the ground and have been working on 20 meter circles in the arena. Our trainer suggested a chiropractor because Queenie is having trouble lunging to her left and picking up the left lead in the canter. Maybe the rib and the shoulder thing contributed to this problem. She is a young mare, only four, so she could still be figuring out her body and how it moves with a rider on her back. The chiropractor suggested using a "Figure Eight" on her while she is in her stall. The video clip shows you what a Figure Eight looks like. Her owner Robyn is leading her to see how Queenie reacts to the contraption. Basically it is a system made of two polo wraps that go around her body and gets her used to bringing her back end up under her. It is supposed to help the horse think of their body as a whole unit. I had never heard of it or even seen it, but I guess it makes sense. In this lower picture, you can see her trace clip. She ended up getting a partial clip instead of a full one. 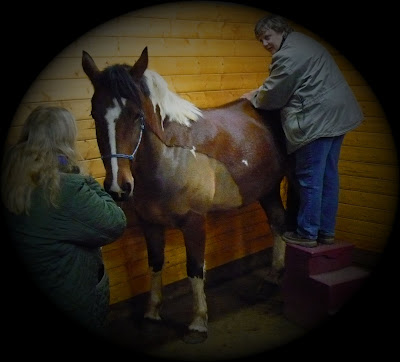 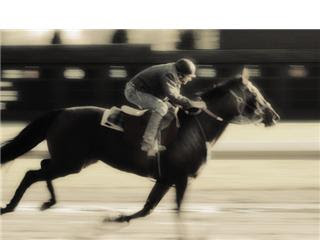 I thought I would share with my blogger friends what I have been up to on Saturday mornings. I can't keep it a secret any longer! I was contacted by an equine still photographer named Richard Larson who was interested in making a documentary about life on the backstretch of Portland Meadows racetrack. I was thrilled to have someone interested in partnering with me on a project I have wanted to do for a long time. Richard has been going to the backstretch for a couple years, taking photos and then selling them to the track folk. He is a fixture on the backstretch himself, as he wanders from barn to barn, talking horses and showing off his beautiful prints. I look forward to waking up early on Saturdays and meeting up to watch the days events. One morning, the track was fogged in and you could hear the horses breathing but couldn't see them until they were right in front of us as they ran by. Last week I met a couple, Ann and Danny who train together. This is a photo of Danny that Richard took. He grew up in Eastern Oregon and started exercising horses as a teenager. He met Ann on the track and together they have spent the last 35 years together training and running horses. I look forward to sharing short video clips and photos from the backstretch with you. I hope through this film project, I can convey the stories of the people I have met along the way.
Posted by photogchic at 11:35 PM 8 comments:

Get out the Clippers 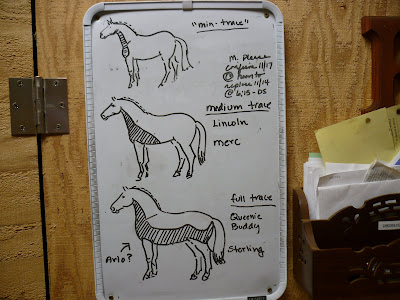 Time to clip some of the horses out at the barn. Their coats are getting thicker and the temperatures have ranged from 40 degrees to 70 degrees. Queenie, the draft cross will be getting a full trace clip which starts under the throat latch and goes down across the shoulder and down the body to the tail. This type of clip is great for really fuzzy horses. The medium trace just goes from the throat latch, over the shoulder just behind the front. There is also a mini trace clip that just goes down the front of the neck. To get your horse used to the clippers, do a lot of approach and retreat. Introduce them, experiment with turning it on and off, rub them with them, and graduate to clipping. Don't push your horse over a threshold when doing this. Take the time it takes and really observe your horses behavior and act accordingly. I turn on the clippers every time I groom Maddy and I rub her all over with it. She enjoys the tickle of it on her nose. 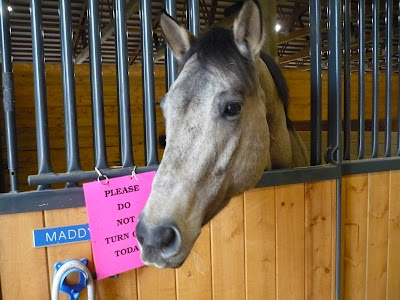 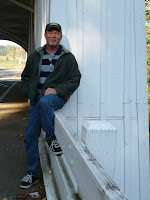 Time flies! My step dad was out visiting for a whole month. He was here looking at properties. He is thinking of moving here in a couple years with my mom. He did dressage back in the day and has been away from horses for about 10 years. He was really soaking in all the natural horsemanship shows and dvds I have here. I know he really misses being around them. I logged him onto the Parelli website and we looked for Parelli Savvy Club members around Minnesota. He is hoping to find someone who doesn't have time for their horse and just wants someone to brush and spend time with it. I hope he finds a situation like that. He is a great rider and I used to watch him work the young horses for my dad. 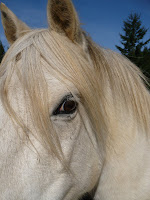 They had a falling out and he sort of walked away from all of it. Sometimes, you need that break. I took one myself for about 10 years. In horse news...Maddy has exactly 4 weeks of stall rest left. I have been riding Queenie, the draft cross. She is really stretching out under saddle and feels so great. She is a very talented girl. The barn bought a new pony named "Sterling." He is picture here. I think he is every little girls dream, a pure white, beautiful guy. 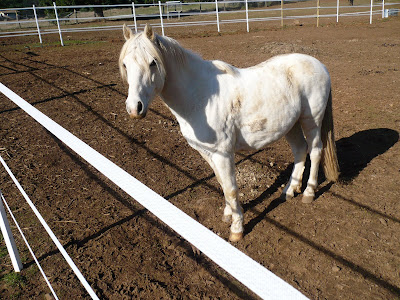